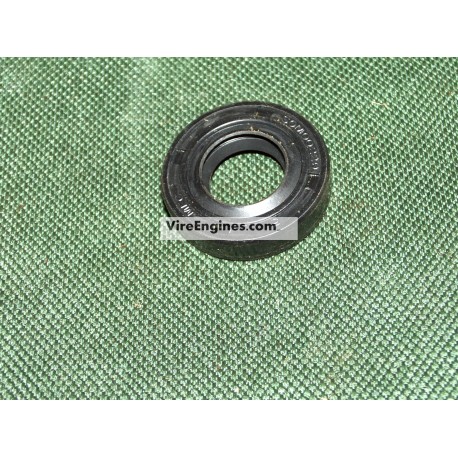 WARNING: it is neccesary to first remove the pump shaft to avoid scraping it, to change this part. You would need a gearbox gasket, and ideally a s/s uprated pump shaft (i sell exchange 52133 ASSY EX )

If you do not uprate the pump shaft to s/s when you replace a leaked seal, it probably will wear out very quickly(the rusted/rough shaft is doing this)

originally there were 2 seals in Vire engines, on the pump shaft;

the gearbox-facing one, to prevent oil leaking out

the pump-facing one, to prevent pump water leaking in.

I now always reccomend and fit 3 seals, there is space between the other 2, and this also blocks the corrosion-causing 'tell tale' hole, and puts the new seal on a likely un-worn part of the old shaft. The intermediate or centre seal should have it's lips facing the pump like the outer seal.

a classic failure on an old Vire engine, is saltwater leaking inot the gear oil, or dribbling out of the 'tell-tale' hole under the pump. In this situation the outer seal (this part) has failed BUT likely not just that.

there was an original design fault in the Vire, assuming it was only used on freshwater lakes (e.g. Finland), so they allowed air to circulate on the steel pump shaft, via a 'tell tale' hole. However in salt air, the shaft rusts (you can see mocroscopic serrations from pitting within the shaft 'seal wear ring' on it, then it rips the seal, leaks in water, the tell tale hole blocks and then into the gear oil, wrecking the clutch, bearings and finally the gear teeth.

Also, I reccomend s/s seal-retaining clips, as the originals rust away ( 52167 )

I would also reccomend plenty of white grease after installing new seals before you replace your smooth clean white-greased shaft.