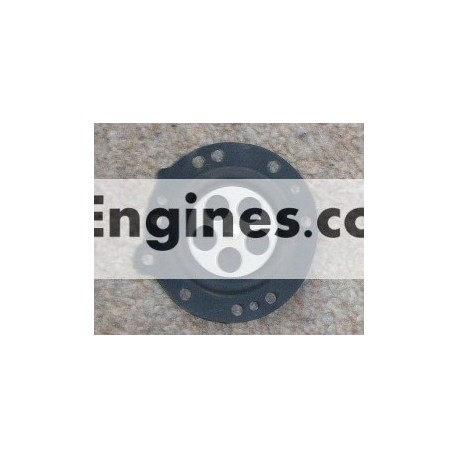 The picture carburettor is not included

replace every 4-10 years (because petrol slowly stiffens it, and it has to stay flexible to keep air/fuel mixture perfect)

The picture carburettor is not included.

if your carburettor has been running fine, but you dont know this part has been changed in the last 4-10 years, then you should order this part, to maintain it's reliability. It loses it flexibility after 4-10 years because petrol attacks rubber.

the diaphram's job, is to keep the fuel level constant height inside the carburettor, regardless of flow, instead of a traditional brass float.

symptoms of a defective diaphragm are:

note, these symptoms are also similar if you have other carb defects, but most commonly they are caused by an ageing stiff diaphragm alone.

If you are having problems with carburation, or have an unknown carburettor to overhaul, be advised its likely that you will need more than just this diaphragm, maybe the fuel valve, gaskets or pump valves/diaphragm that come in the 'kit'.

simple choice i advise you order: